Rabies is a disease that is caused by the rabies virus.  It affects the nervous system of humans and other mammals. People get rabies from the bite of an animal infected with the rabies virus (a rabid animal).

In the United States, human fatalities associated with rabies occur in people who fail to seek medical assistance, usually because they were unaware of their exposure. The early symptoms of rabies in people are similar to that of many other illnesses, including fever, headache, and general weakness or discomfort. As the disease progresses, more specific symptoms appear and may include insomnia, anxiety, confusion, slight or partial paralysis, excitation, hallucinations, agitation, hyper salivation (increase in saliva), difficulty swallowing, and hydrophobia (fear of water). Death usually occurs within days of the onset of these symptoms. The last human case of rabies in Illinois was reported in 1954.

The vast majority of rabies cases reported in the United States occur in wild animals, like a raccoon, skunk, fox, coyote and bats. Domestic animals such as cattle, cats and dogs account for less than 10% of the reported animal rabies cases.

In Illinois, bats are the primary species identified with rabies. During summer in Chicago, the likelihood of human-bat contact increases because of bat migration and feeding patterns. Although not all bats carry rabies, bats in Chicago and the surrounding area test positive for the virus each year. For Chicago in 2018, the Illinois Department of Public Health tested 284 of bats out of which 14 rabies-positive bats were identified.

Although there has not been a reported case of human rabies in Illinois since 1954, rabies in humans is almost always a fatal disease. Therefore, it is critical to provide prompt and appropriate rabies post-exposure prophylaxis (PEP) when bat exposures take place.

Exposures of concern for rabies transmission by bats:

The Chicago Department of Public Health has created an algorithm for providers who are evaluating potential human exposures to rabies for bats & wild animals and domestic animals to help determine whether an individual will require rabies post exposure prophylaxis.

What is a Provoked Bite?
A provoked bite might be expected given the circumstances.  Provoked bites can occur when separating two fighting animals, handling an injured or unknown animal, running or biking by a dog, entering a dog's property or taking away an animal's food or toys.

Next Steps After Exposure is Verified
Once the exposure scenario is verified to represent a risk of rabies transmission, the exposed person should receive Rabies Immune Globulin (RIG) and rabies vaccine. The first dose of the 4-dose course should be administered as soon as possible after exposure (day 0). Additional rabies vaccine doses then should be administered on days 3, 7, and 14 after the first vaccination.

Please alert the pharmacy in your facility if you have a potential exposed person to ensure availability if RIG and vaccine.

What is a rabies exposure?

Rabies is transmitted through exposure to virus in saliva or brain/nervous system tissue. Rabies exposures can be either:

How did the exposure occur?

When and where (address, city, state, country) did the exposure occur?

If low risk species, was the animal acting unusual?

Is the animal availble for testing?  If so, the patient should call 311 so that the animal may be collected. 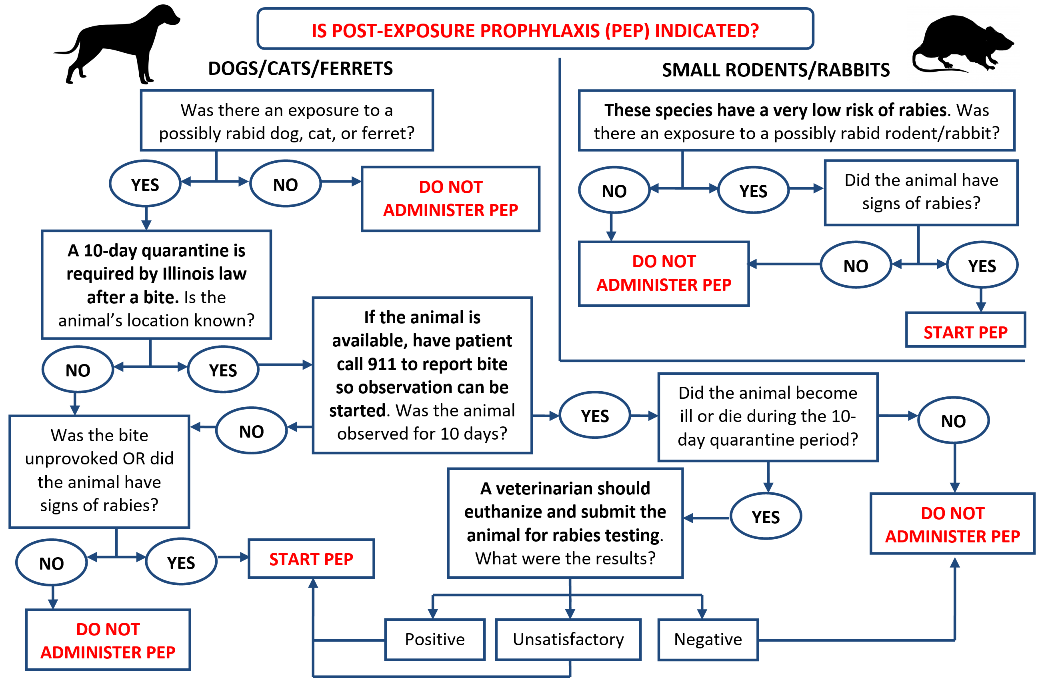 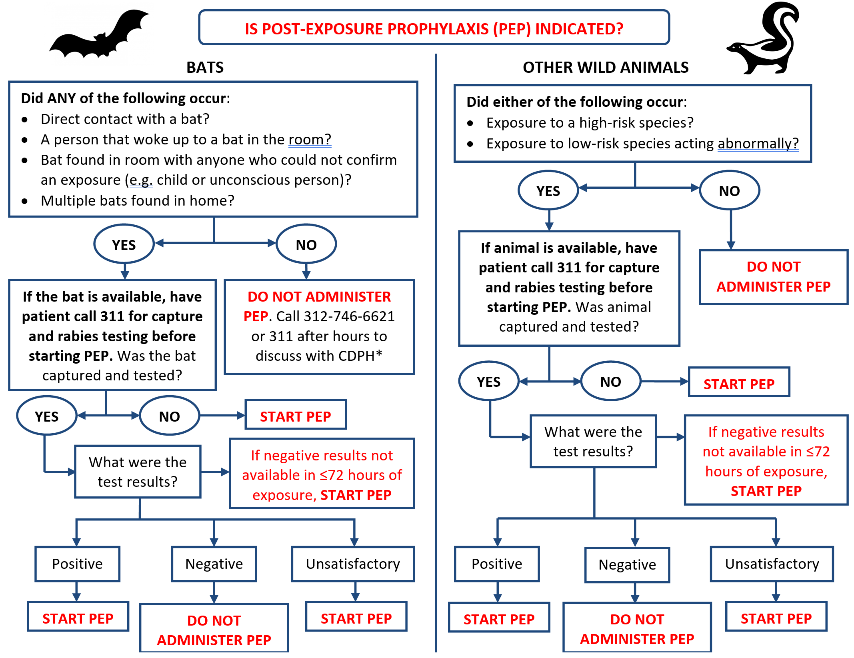 Imovax (produced by Sanofi Pasteur) is experiencing a temporary supply shortage and is not available at this time. RabAvert vaccine (produced by GlaxoSmithKline) is experiencing a temporary limited supply but is still available for both pre-exposure prophylaxis and PEP. If vaccine is not available from the distributor, order directly from the manufacturer on an as-needed basis. Healthcare providers who are unable to obtain Imovax should use RabAvert during this time, even if Imovax was used to start a pre-exposure or PEP schedule that is in progress.

Both Kedrab (produced by Kedrion Biopharma) and HyperRab (produced by Grifols) are available with no restrictions for rabies immune globulin. Imogam (produced by Sanofi Pasteur) is currently experiencing a temporary shortage. Providers can obtain Imogam directly from the manufacturer.

The CDC continues to work with partners to monitor the status of rabies biologic supplies. The current situation is not expected to impact overall availability of PEP nationally. Healthcare providers should continue to administer PEP when indicated.

For Clinical Questions or to Report Suspect Cases, Contact:

*After hours, weekends, and holidays, call 311 and ask for the communicable disease physician on-call (or 312-744-5000 if outside the City of Chicago).

Reporting also can be done through INEDSS (Illinois Notifiable Electronic Disease Surveillance System) or a Rabies Case Report Form can be completed and faxed back to the Chicago Department of Public Health at 312-746-6388.