Acute flaccid myelitis (AFM) is an illness characterized by acute onset of flaccid limb weakness and magnetic resonance imaging (MRI) showing lesions in the gray matter of the spinal cord.

Most AFM cases have arm and/or leg weakness coupled with loss of muscle tone and reflexes. Additionally, some cases have facial/eyelid drooping, difficulty swallowing, slurred speech, difficulty moving their eyes, and/or pain in their arms and legs.

While the cause of AFM has not been identified, it is hypothesized that a viral agent (e.g., enterovirus D68) is involved, as almost all (90%) AFM cases had a preceding respiratory illness and/or fever, increased incidence of AFM cases typically coincides with EV-D68 outbreaks, and viral agents (e.g., EV-D68, EV-A71, Coxsackievirus A16) have been detected in the spinal fluid of a small number of AFM cases.

Case Definition, Reporting, And Specimen Collection/Submission Guidelines
Reminder
Clinicians should continue to be vigilant and report all patients under investigation that meet the clinical criteria for acute flaccid myelitis (i.e., sudden onset of flaccid limb weakness) to the Chicago Department of Public Health (CDPH) regardless of any laboratory results or MRI findings.

In 2021, the CDC updated the AFM case definition, which is used to ensure consistent and accurate case classification for surveillance purposes. All patients under investigation for AFM will receive final classification by a team of expert neurologists.

An illness with onset of acute flaccid weakness of one or more limb AND absence of a clear alternative diagnosis attributable to a nationally notifiable condition. 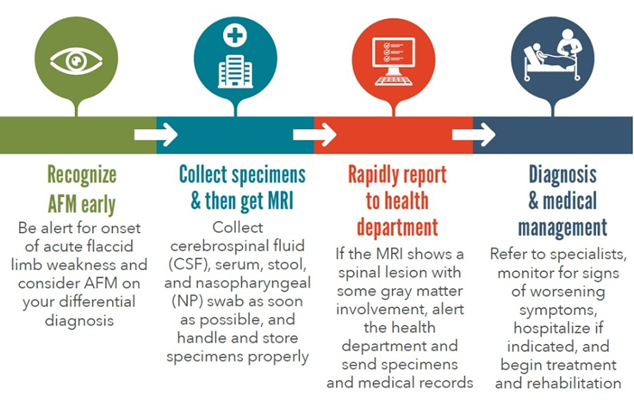 If you have a patient under investigation (PUI) with acute onset of flaccid weakness in one or more limbs:

Collect specimens as close to the onset of limb weakness as possible and store according to the table below: